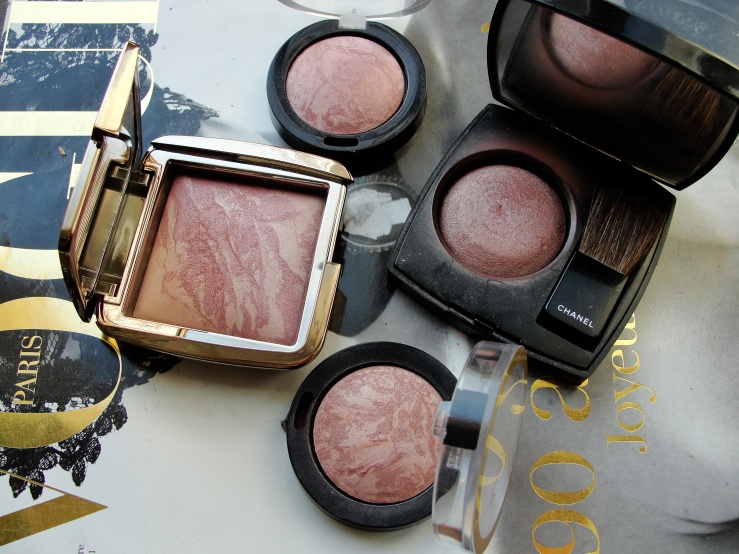 I have my flight and accommodation booked so I can say it now: I am moving to London in less than two weeks! So thrilled! Today, we’re also talking…

Neutral blushers are my jam and ever since Hourglass Ambient Lighting blushes launched, I’ve been keeping my eye on Mood Exposure which is described as a soft plum and I’ve seen it be compared to Tarte Exposed or Nars Douceur. Tarte is a bit hard to get in Europe and for some reason, Nars discontinued Douceur so I had no other excuse but to get Mood Exposure. How does it compare to all the other neutral blushers I own?

First up. You might know Chanel Joues Contraste in Accent is my all-time favourite blusher but as are most of Chanel best products, it was limited edition. Accent is dusty rose shade with a subtle golden shimmers that translate onto the skin as the most healthy looking glow. It is also unbeatable in terms of wear looking in tact after a long day. Even though, it’s baked, I’ve made quite a dent in it and I fancied finding a dupe just in case. Mood Exposure was my bet.

I previously tried Max Factor Creme Puff blushes which have the same marbled pattern that the Hourglass Ambient Lighting blushes. I have the shades Lavish Mauve and Nude Mauve. The first one is light soft pink with a hint of mauve and the second one is pretty dang close to Accent but slightly lighter. Another one, I thought I’d throw in is long-time favourite L’Oreal Le Blush in Nude Pink which I used to use interchangeably with Accent.

Both Chanel and Max Factor blushes are baked so it would be harder to go overboard with them than Mood Exposure. You can pick up a lot of product with that one and it’s very pigmented as is Chanel one but the three drugstore offerings are quite sheer and in the swatches I had to use a few swipes to get the pigments to show up. Apart from the pigmentation, Hourglass and Chanel are also superior in the wear time. Accent and Mood Exposure last all day on the cheeks. Again, they’re all great quality and last a decent amount of time but I’d rather not have my blush fade throughout the day.

When it comes to the shade, Mood Exposure looks more plum in the pan than it translates onto my skin. It’s more nude on but a bit more reddish than Accent. I’d be interested to see how it compares to the new Chanel Alzane (damn, every time I read that, it’s like Rachel Zane?)! Nude Mauve, like I said, has the same bronze tone as Accent but is less pigmented so you have to build it up on the cheeks. I suppose Mood Exposure would be more of darker version of Nude Mauve and Lavish Mauve mixed together. Lavish Mauve is however the sheerest all of these and I wouldn’t recommend it if you’re more than fair-skinned. Lastly, Nude Pink is the closest to Accent but a bit more bronzed. It is however the finish that Max Factor Creme Puff and Hourglass Ambient Lighting blushes have in common while Chanel and L’Oreal have tiny shimmer particles (not even visible on the skin), the two shades marbled together somehow allow the blush to provide luminous finish which essentially looks like skin. Chanel and L’Oreal pack on a little more glow.

Have I found a replacement for my beloved Chanel Accent? I suppose Mood Exposure is the closest I’ll ever get. And while I prefer the finish of the Chanel, the wear time is comparable. Are Max Factor marbled mauves a dupe for Mood Exposure? In terms of a finish only because the Hourglass quality is much better. But in all honesty, on the cheek they give the same look with perhaps only Lavish Mauve leaning a bit more pink. If you have any suggestions for a neutral blushes, send them my way. And tell me, what is your all-time favourite blusher?

17 thoughts on “Hourglass Mood Exposure and Other Neutral Blushes”